February is over! Let's see how many companies sent me a dividend check for my ownership. These checks are the results of decisions I made earlier in life, sometimes years ago, where I decided to purchase shares in these companies. Nowaydays I still collect these checks but I have to do absolutely nothing to receive them. They just get deposited in my brokerage account, no questions asked. Isn't that great?! 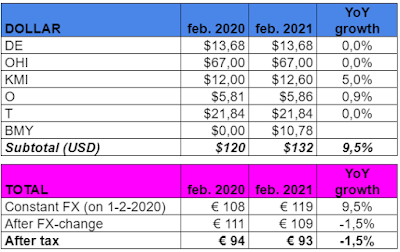 Based on a constant exchange rate my dividend income grew by just under 10%. It's not bad considering what happened last year. The lack of dividend increases between Deere, OHI and AT&T and a measly increase from Realty Income (O) is starting to take its toll. Luckily, Deere announced a pretty sweet dividend raise last week, so in the next quarter that row will look a lot better in comparison with the year before! One of my latest additions Bristol-Myers Squibb (BMY) also paid its first dividend in february. However, due to changes in the exchange rate by dividend income in euro's (€) is more or less the same as last year. Nothing to worry, as that will probably change later in time or life.

With a great first month, and a decent 2nd, 2021 is off to a good start. In the last two weeks I also received several dividend increases which raised my forward dividend income to € 1.940. I will start to see these effects later on this year. It's cool to note that during these two months I received more dividend income than the whole of 2014 (my first full year of dividend investering). If I add the coming month of March I will (almost) surpass the whole of 2015, 2016 and 2017 as well (not combined obviously!).
With the marktet upswing in February I also reached a new milestone in terms of portfolio value. I reached the € 50.000 milestone! The last € 10.000 took about 17 months which is about the same as the € 10.000 before that. I hope to reach the next €10.000 a bit faster and plan to increase my monthly contribution going forward. More on that in a later post because I used a little bit of financial engineering for that!
How was your second month of the year?