It's time to give an update of the dividends I received last month. Twelve companies decided to pay me a dividend for my ownership. Total dividends (after tax) are around €191, which is an increase of 25% compared to last year. The growth was fueled by solid dividend increases from BBL and UNP (raise 1 and raise 2), an addition to my existing position in Unilever earlier this year and my newest purchase of BEP.

You can see the breakdown in the table below. 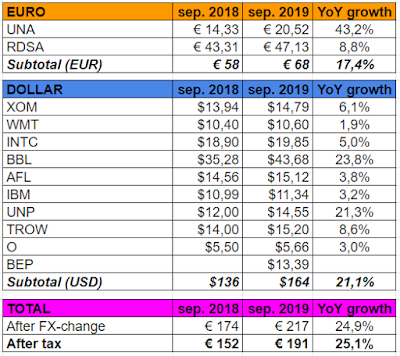 It's the same message all over again. It's been my best September so far! I expect to hit my first $200 month next year (maybe in March, else in September). As of now, my annual dividend income hovers around € 1.525 before taxes. This is in line with last month. I expect to do another purchase in the coming days with fresh capital and received dividends combined.

I made a new tree chart of my portfolio which shows the weights of my positions but also the price performance during the last month. Green are the best performers, red are the worst. In this case UNA, KO, BAX and PM are red but they only decreased about 1 or 2% last month, so nothing bad. INTC, DE, RDS and IBM gained about 8 to 11%, that's nice!

September seems to be the month with a lot of dividend payers. How was your September?